Top 50 Weak Minded Quotes That Will Give You Inspiration 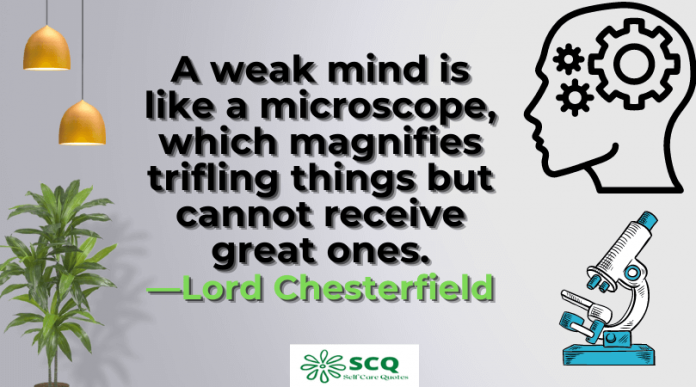 1. Weak minds sink under prosperity as well as adversity; but strong and deep ones have two high tides. —David Hare

2. A weak mind is like a microscope, which magnifies trifling things but cannot receive great ones.—Lord Chesterfield

3. We are all born ignorant, but one must work hard to remain stupid.—Benjamin Franklin

6. Experience informs us that the first defence of weak minds is to recriminate.—Samuel Taylor Coleridge

7. Astrology and all these mystical things are generally signs of a weak mind; therefore as soon as they are becoming prominent in our minds, we should see a physician, take good food, and rest.—Swami Vivekananda

8. Question with boldness even the existence of a God; because, if there be one, he must more approve of the homage of reason, than that of blind-folded fear.—Thomas Jefferson

9. Weak minds lead to weak actions. A strong, disciplined mind, which anyone can cultivate though daily practice, can achieve miracles. If you want to live life to the fullest, care for your thoughts as you would your most prized possessions. Work hard to remove all inner turbulence. The rewards will be abundant.—Robin Sharma

10. Idleness is only the refuge of weak minds.—Lord Chesterfield

11. Every reform, however necessary, will by weak minds be carried to an excess, that itself will need reforming.—Samuel Taylor Coleridge

12. Weak minds make treaties with the passions they cannot overcome, and try to purchase happiness at the expense of principle; but the resolute will of a strong man scorns such means, and struggles nobly with his foe to achieve great deeds.—Henry Wadsworth Longfellow

14. Profanity is the result of a weak mind trying to express itself forcably.—Randall Dale Adams

15. A weak mind is the only defect out of our power to mend.—Francois de La Rochefoucauld

16. Habit is, to weak minds, a species of moral predestination, from which they have no power to escape.—Maria Edgeworth

17. Those who prefer their English sloppy have only themselves to thank if the advertisement writer uses his mastery of the vocabulary and syntax to mislead their weak minds.—Dorothy L. Sayers

18. The lack of facts holds you back. The odds are stacked against a weak mind.—Kool Moe Dee

19. Repentance is the virtue of weak minds.—John Dryden

20. A bed or a chair will trick you if you stay still on them long at a time. They will draw out your strength and leave you weak as water.—Julia Peterkin

21. God will not damn a lunatic’s soul. He knows that the powers of evil are too great for those of us with weak minds.—Garrett Fort

22. Beauty stands In the admiration only of weak minds Led captive.—John Milton

23. Astrology and all these mystical things are generally signs of a weak mind—Swami Vivekananda

24. In matters of great concern, and which must be done, there is no surer argument of a weak mind than irresolution; to be undetermined where the case is so plain, and the necessity so urgent. To be always intending to live a new life, but never to find time to set about it; this is as if a man should put off eating, and drinking, and sleeping, from one day and night to another, till he is starved and destroyed.—John Tillotson

25. Distance either of time or place is sufficient to reconcile weak minds to wonderful relations.—Samuel Johnson

26. Question with boldness even the existence of a god.—Thomas Jefferson

27. Oh how the passions, insolent and strong, Bear our weak minds their rapid course along; Make us the madness of their will obey; Then die and leave us to our griefs as prey—George Crabbe

28. No two things differ more than hurry and dispatch. Hurry is the mark of a weak mind, dispatch of a strong one. A weak man in office, like a squirrel in a cage, is laboring eternally, but to no purpose, and is in constant motion without getting on a job; like a turnstile, he is in everybody’s way, but stops nobody; he talks a great deal, but says very little; looks into everything but sees nothing; and has a hundred irons in the fire, but very few of them are hot, and with those few that are, he only burns his fingers.—Charles Caleb Colton

29. Insanity is often the logic of an accurate mind overtasked. Good mental machinery ought to break its own wheels and levers, if anything is thrust among them suddenly which tends to stop them or reverse their motion. A weak mind does not accumulate force enough to hurt itself; stupidity often saves a man from going mad.—Oliver Wendell Holmes Sr.

30. Your own reason is the only oracle given to you by God.—Thomas Jefferson

31. It is the sign of a weak mind to be unable to bear wealth.—Seneca the Younger

32. Hurry is the mark of a weak mind, dispatch of a strong one.—Charles Caleb Colton

33. It shows a weak mind not to bear prosperity as well as adversity with moderation.—Marcus Tullius Cicero

34. Anyone who thinks that God wins or loses games has to have an awfully weak mind.—Harold Ballard

35. I was blessed with a strong arm and a weak mind.—Dizzy Dean

36. A weak mind sinks under prosperity, as well as under adversity.—Julius Charles Hare

37. Novels do not force their fair readers to sin, they only instruct them how to sin; the consequences of which are fully detailed, and not in a way calculated to seduce any but weak but weak minds; few of their heroines are happily disposed of.—Johann Georg Ritter von Zimmermann

38. What the unpenetrating world call Humanity, is often no more than a weak mind pitying itself.—Samuel Richardson

39. In the admiration only of weak minds
Led captive. Cease to admire, and all her plumes
Fall flat and shrink into a trivial toy,
At every sudden slighting quite abash’d.—John Milton

40. Shake off all the fears and servile prejudices under which weak minds are servilely crouched. Fix reason firmly in her seat, and call to her tribunal every fact, every opinion. Question with boldness even the existence of a god; because, if there be one, he must more approve the homage of reason, than that of blindfolded fear… Your own reason is the only oracle given you by heaven, and you are answerable not for the rightness but uprightness of the decision.—Thomas Jefferson

41. Organized religion is a sham and a crutch for weak-minded people—Jesse Ventura

42. The good Lord was good to me. He gave me a strong body, a good right arm, and a weak mind.—Dizzy Dean

43. But learned people can analyze for me why I fear hell and their implication is that there is no hell. But I believe in hell. Hell seems a great deal more feasible to my weak mind than heaven. No doubt because hell is a more earth-seeming thing. I can fancy the tortures of the damned but I cannot imagine the disembodied souls hanging in a crystal for all eternity praising God.—Flannery O’Connor

44. A weak mind sinks under prosperity, as well as under adversity. A strong and deep mind has two highest tides – when the moon is at the full, and when there is no moon.—David Hare

46. It is true that the reluctance to abstain from animal food, in those who have been long accustomed to its stimulus, is so great in some persons of weak minds, as to be scarcely overcome; but this is far from bringing any argument in its favour—Percy Bysshe Shelley

47. No two things differ more than hurry and despatch. Hurry is the mark of a weak mind; despatch of a strong one.—Charles Caleb Colton

48. Whether we like it or not, one day science will take God from us! This will be especially a great destruction for the weak minds!—Mehmet Murat Ildan

49. Weak minds may be injured by novel-reading; but sensible people find both amusement and instruction therein.—Henry Ward Beecher

50. Weak minds exaggerate too much the wrong done to the Africans. —Montesquieu