HomeQuotesTop 50 Drew Brees Quotes That Will Give You Inspiration
Quotes

Top 50 Drew Brees Quotes That Will Give You Inspiration 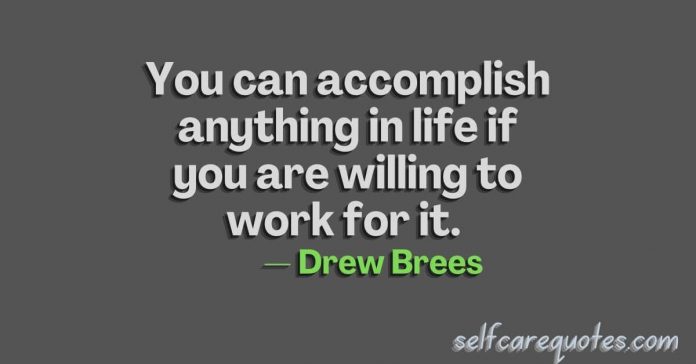 A footballer can be a great inspiration. If you don’t believe this then look at Drew Brees. This person is a part of some people’s lives and has a very strong influence on people’s life. Drew Brees has some quotes that can change your life.

Here we arrange some of his quotes for you. You may read these Drew Brees quotes to get good teaching.

1. You can accomplish anything in life if you are willing to work for it. — Drew Brees

3. “You are either getting better or getting worse, but you are never staying the same.” — Drew Brees

4. “God, I know that if you bring me to it, you will bring me through it. I know you have a plan, but quite honestly I don’t see it right now. But I know it’s there. I know I have to believe. I know I need to have faith. I have to trust you. And I do trust you. But it’s hard right now.” — Drew Brees

5. “Anyone can see the adversity in a difficult situation, but it takes a stronger person to see the opportunity.” — Drew Brees

6. “When you wake up, think about winning the day. Don’t worry about a week or a month from now — just think about one day at a time. If you are worried about the mountain in the distance, you might trip over the molehill right in front of you. Win the day!” — Drew Brees

7. “The truth is, you don’t learn much from winning, but losing can make you a lot stronger.” — Drew Brees

9. “Forget all the doubters. Forget all the critics. Is there satisfaction in proving them wrong? Sure, but I don’t want to give those people the gratification of even dwelling on their words that long. There’s a motivator much more powerful than doubt. I play in honor of those who believe in me.” — Drew Brees

11. “Under pressure, would I fold and disappear, or would I show everyone that when bad things happen, you fight?” — Drew Brees

12. “I realized I could focus on my mistakes and feel sorry for myself, or I could learn from those mistakes and use them as motivation to come back stronger.” — Drew Brees

14. “The only team that believed in me was the Saints, and I feel like I owe them a great debt of gratitude. I want to give them what they saw in me-a guy who could lead this team to a championship.” — Drew Brees

15. “I grew up in Texas, obviously a huge football state.” — Drew Brees

17. “We always try to mix it up-three-step drop, five-step drop, seven-step drop, naked bootleg. We spread out all these kinds of things to keep the defensive pass rush unbalanced.” — Drew Brees

18. “I was brought here for a reason. I feel like I can make a tremendous impact, not only with the team but in the community.” — Drew Brees

20. “I was honored to spend time with the President on an issue that is clearly important to him. I was also impressed by his wide receiver skills.” — Drew Brees

21. “You look at public education system, charter schools, infrastructure, in so many ways New Orleans has come back stronger.” — Drew Brees

22. “It took me six months to redeem myself at least to have another chance to at least have her get to know me and let her know I was at least a decent guy and to give me a shot. And here we are, we’ve been married seven years.” — Drew Brees

Drew brees motivational quotes that will give you inspiration

23. “It has been an interesting road, but I wouldn’t trade any of it for the world, because I feel like all of those instances in my life I felt molded me and strengthened me and made me who I am.” — Drew Brees

24. “Sometimes all you need is just for somebody to believe in you in order to be able to accomplish maybe what you never thought you could.” — Drew Brees 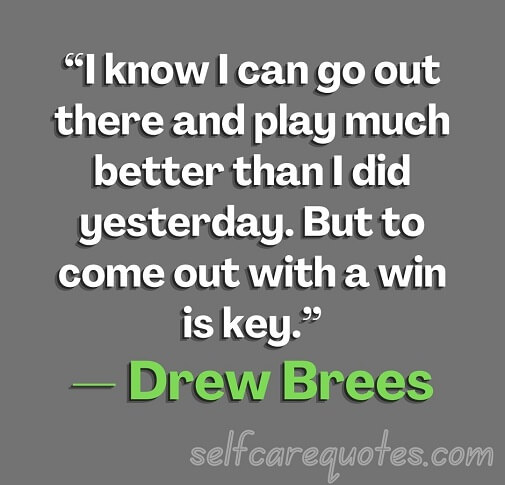 27. “I know I can go out there and play much better than I did yesterday. But to come out with a win is key.” — Drew Brees

28. “I obviously take a lot of pride in what I do on the football field, because that has the ability to influence a lot of people. That puts smiles on people’s faces. That gives people a pep in their step on Monday morning when they go back to work.” — Drew Brees

29. “But I’ve found that when you start talking to people, everybody’s family has something they’ve dealt with. Every family has issues and is a little dysfunctional. It’s not whether you will have problems within your family; it’s how you handle those difficulties when they come your way.”— Drew Brees

30. “And at the time, it is funny how you can look at something and say, for example with my shoulder injury, when it first happened I said this is the worst thing that could happen to me. Why me, why now? Now I look back and say it was probably the best thing that happened to me.”— Drew Brees

31. “The Madden NFL franchise holds a special place in popular culture and the cover is a coveted position for players all over the league. I’m honored to be the first cover athlete chosen by Madden NFL fans and it’s a great way to cap off an amazing year for the Saints and the city of New Orleans.” — Drew Brees

32. “We just believed in ourselves, and we knew that we had an entire city and maybe an entire country behind us. What can I say? I tried to imagine what this moment would be like for a long time, and it’s better than expected.” — Drew Brees

33. “Four years ago, whoever thought this would have happened?” — Drew Brees

34. “I’m just feeling like it was meant to be. What can I say? The birth of my son, and in the first year of his life, we won a Super Bowl Championship.”— Drew Brees

35. “When you care about a guy beyond just the field, that’s when the chemistry becomes really special.” — Drew Brees

36. “I get people stopping me on the street like twenty times a day, telling me how great it makes them feel and how it just helps them to go about their day and rebuild their lives. It means a tremendous amount.” — Drew Brees

37. “There’s always a little bit of personal satisfaction when you prove somebody wrong.” — Drew Brees

38. “I love the Cowboys in the early 90s. That was their heyday, winning all those Super bowls. Troy Aikman was a person I looked up to.” — Drew Brees

39. “We’ve got something special going here. We want to keep it going. You don’t have many opportunities like this, and the window of opportunity for us is now.” — Drew Brees

41. “We all understand what we signed up for, but then again, you don’t want this to be a game that puts people in wheelchairs at age 40.” — Drew Brees

42. “I don’t believe that you can be too short as a quarterback. It’s not about height.” — Drew Brees

43. “Each day, you get an ounce more confidence. When we’re playing like we are, there’s no reason not to.” — Drew Brees

45. “The Madden Curse has really taken on a life of its own. People just love talking about it, and it is what it is, but I look at it as a challenge.” — Drew Brees

46. “I hope our hopes and aspirations are bigger than setting records.” — Drew Brees

47. “I needed New Orleans so badly back in 2006, just somebody to believe in me, somebody to care about me.” — Drew Brees

48. “All of the products I take help me feel like I’m getting the maximum amount out of my workouts and out of my practice work. They’re a big part of preparing and recovering each week.” — Drew Brees

49. “If you are looking for your purpose or calling, you will find it in your pain.” — Drew Brees

50. “Never let anyone in life tell you that you can’t have something that you are willing to work for.” — Drew Brees

“I can change a diaper in 30 seconds flat. I set the new one beneath the old one. That way, it’s just wipe and pull the flap over.” — Drew Brees

Who was Drew Brees?

Drew Brees is a famous American footballer. He has a very strong and renowned football career. If I try to give you a short picture of his football career then it will take my whole article, I will get less time to discuss his quotes.

He played 20 seasons in the NFL. Brees led many completions like career pass completions, career completion percentage, and regular-season passing yards. Besides this, he has some more great achievements. His role in the NFL was as a quarterback.

Biography reveals a man completely. If you want to know about the famous footballer Drew Brees then you need to know about his biography. Here I am going to present a short biography of him for you.

The early life of Drew Brees was not far different than a normal American child. He was born on 15 January 1979. His birth city was Dallas, Texas, U.S. His father’s name is Eugene Wilson who was a lawyer.

His mother’s name is Mina Ruth. In profession, She was an attorney. Both are from the almost same profession but their children were sports-minded.

When Drew Brees was in class seven, his parents got a divorce. This was the hardest time for both him and his brother. Later the situation becomes normal.

The educational life of Drew Brees is not so open and known to all. For this reason, nobody knows about his primary education. In 1993, Drew Brees admitted himself to Westlake High School. After completing this, Drew enrolled at Purdue University. This was his main university. In 2001, Brees graduated with industrial management. Besides this, he was a Sigma Chi fraternity member.

Drew Brees’s whole life is his career. I already mentioned his great achievements at the beginning of this article. But that is not the end. He has a number of more achievements that are a dream of many new footballers. When he was a school-going boy, he started his sports career which is still going on.

A successful person leaves a lot of things to follow for the next generations. Drew Brees is one of the most successful footballers in the USA.

He teaches us how to become the best footballer and also a great man. Drew Brees’s quotes also teach us a lot of things.

You may follow him to know how an ordinary person can be the great footballer of a country.

The teachings of famous quotes from a famous person have a special effect on our life. They are much more practical and realistic. Drew Brees quotes are also very pragmatic with thoughts and teachings. You may read his quotes.