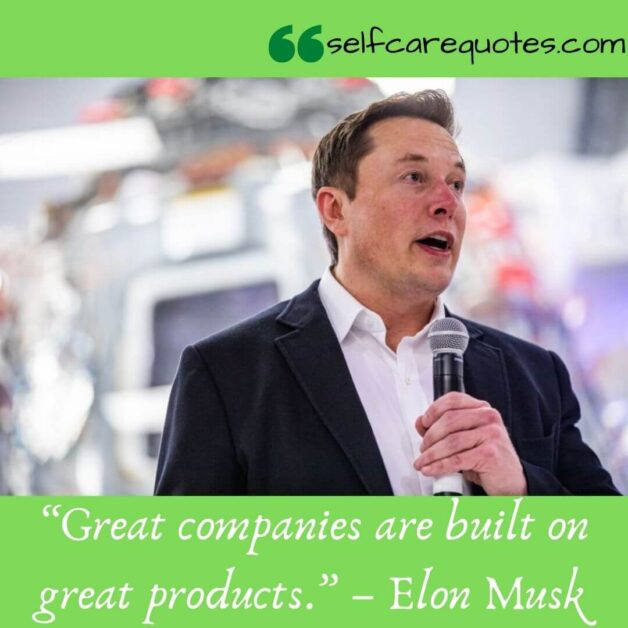 Elon Musk is a renowned American businessman. He is the founder of ‘Paypal’ which is a popular online payment service. In 1999, Elon Musk started this as the name of ‘X.com.’ He also founded ‘SpaceX,’ ‘The Boring Company,’ and ‘Tesla Motors.’

He is the co-founder of ‘Neuralink’ and ‘OpenAI.’ With his hard work, he successfully enrolled his name in the list of a multimillionaire. This talented entrepreneur was born in South Africa. If you want to acquaint with this famous businessman’s intelligence, you may look over the Elon Musk quotes.

You may also find Elon Musk quotes about technology. He tells about the technological advancement of the world. He says that if we went back one hundred years ago, our present modern world and its advanced technology would seem like magic.

Now we can talk to people worldwide; we can send images, and we can fly with modern technological development. All of these were like magic before hundred years ago.

2. “It is possible for ordinary people to choose to be extraordinary.” – Elom Musk

3. “I don’t create companies for the sake of creating companies, but to get things done.” – Elon Musk

4. “It’s Ok to have your eggs in one basket as long as you control what happens to that basket.” – Elon Musk

5. Silicon Valley has some of the smartest engineers and technology business people in the world. -Elon Musk

6. “The first step is to establish that something is possible. Then probability will occur.” – Elon Musk

7. “If you get up in the morning and think the future is going to be better, it is a bright day. Otherwise, it’s not.” – Elon Musk

8. “People should pursue what they’re passionate about. That will make them happier than pretty much anything else.” – Elon Musk

9. “My biggest mistake is probably weighing too much on someone’s talent and not someone’s personality. I think it matters whether someone has a good heart.” – Elon Musk

12. “If you go back a few hundred years, what we take for granted today would seem like magic – being able to talk to people over long distances, to transmit images, flying, accessing vast amounts of data like an oracle. These are all things that would have been considered magic a few hundred years ago.” – Elon Musk

13. “Some people don’t like change, but you need to embrace change if the alternative is disaster.” – Elon Musk

14. “For me it was never about money, but solving problems for the future of humanity.” – Elon Musk

16. “Don’t confuse schooling with education. I didn’t go to Harvard but the people that work for me did.” – Elon Musk

19. “If you’re co-founder or CEO, you have to do all kinds of tasks you might not want to do. If you don’t do your chores, the company won’t succeed. No task is too menial.” – Elon Musk

20. “Starting and growing a business is as much about the innovation, drive, and determination of the people behind it as the product they sell.” – Elon Musk

Top Popular 55 Elon Musk Quotes. You can see the Video

21. “When Henry Ford made cheap, reliable cars, people said, ‘Nah, what’s wrong with a horse?’ That was a huge bet he made, and it worked.” – Elon Musk

22. “When something is important enough, you do it even if the odds are not in your favor.” – Elon Musk

24. “You shouldn’t do things differently just because they’re different. They need to be… better.” – Elon Musk

25. “I think that’s the single best piece of advice: Constantly think about how you could be doing things better and questioning yourself.” – Elon Musk

Elon Musk Quotes About the Future:

If you are suffering from depression and despair in your life, you may go through the Elon Musk quotes about the future. The quotes are highly motivational for the struggle of our future. He believes that persistence is very important for us to be a successful person in life. He advises us to wake up with a goal that can change our future.

26. “Your Will is the most accurate way to predict the future.” – Elon Musk

27. “Going from PayPal, I thought: ‘Well, what are some of the other problems that are likely to most affect the future of humanity?’ Not from the perspective, ‘What’s the best way to make money?” – Elon Musk 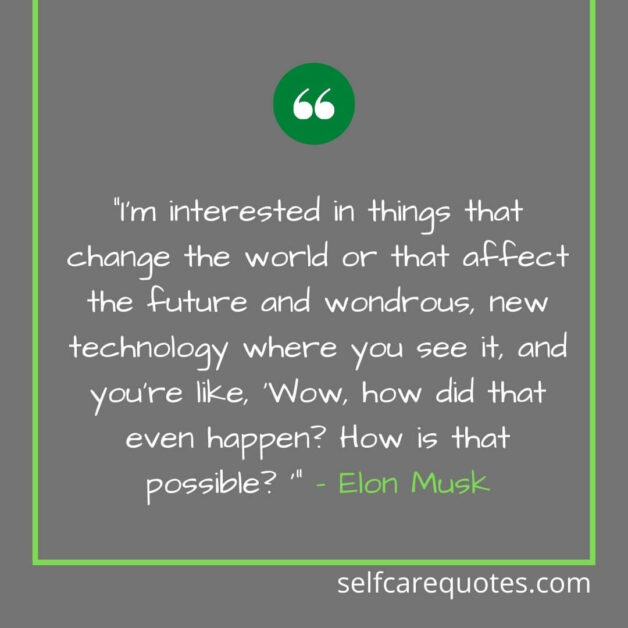 “I’m interested in things that change the world or that affect the future and wondrous, new technology where you see it, and you’re like, ‘Wow, how did that even happen? How is that possible?’” – Elon Musk

29. “Why do you want to live? What’s the point? What inspires you? What do you love about the future? And if the future’s not including being out there among the stars and being a multi-planet species, it’s incredibly depressing if that’s not the future we’re going to have.” – Elon Musk

30. “If you get up in the morning and think the future is going to be better, it is a bright day. Otherwise, it’s not.” – Elon Musk

31. “I always have optimism, but I’m realistic. It was not with the expectation of great success that I started Tesla or SpaceX…. It’s just that I thought they were important enough to do anyway.” – Elon Musk

32. “Don’t delude yourself into thinking something’s working when it’s not, or you’re gonna get fixated on a bad solution.” – Elon Musk

We know that Elon Musk is the co-founder of ‘Tesla.’ He leads the designing and global manufacturing of the battery, solar energy products, and electric vehicles of Tesla Company. You may read about his experience in the Elon Musk quotes about tesla. 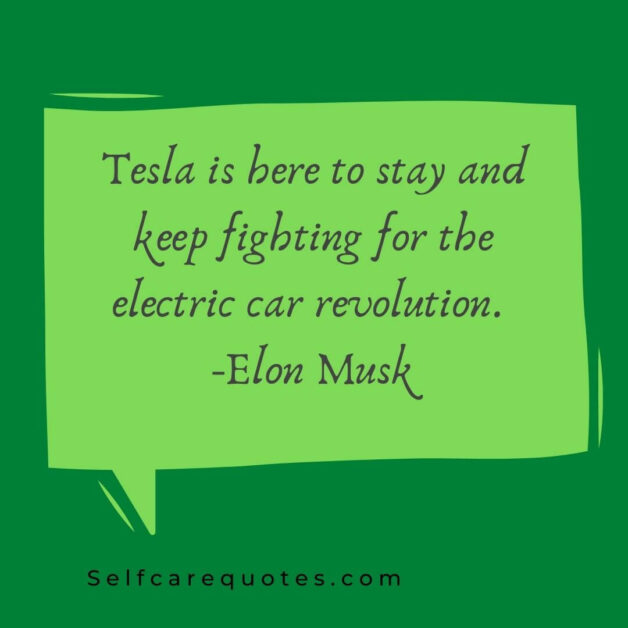 Tesla is here to stay and keep fighting for the electric car revolution. -Elon Musk

34. I wish we could be private with Tesla. It actually makes us less efficient to be a public company. -Elon Musk

35. I think Tesla will most likely develop its own autopilot system for the car, as I think it should be camera-based, not Lidar-based. However, it is also possible that we do something jointly with Google. -Elon Musk

36. The fuel cell is just a fundamentally inferior way of delivering electrical energy to an electric motor than batteries. –Elon Musk

38. We polled Tesla owners, do you want autopilot disabled or not. Not one person wanted it disabled. That’s pretty telling. -Elon Musk

39. I think long term you can see Tesla establishing factories in Europe, in other parts of the U.S. and in Asia. -Elon Musk

40. “We believe the Tesla Semi will deliver a substantial reduction in the cost of cargo transport while increasing safety…” -Elon Musk

41. “Persistence is very important. You should not give up unless you are forced to give up.” – Elon Musk 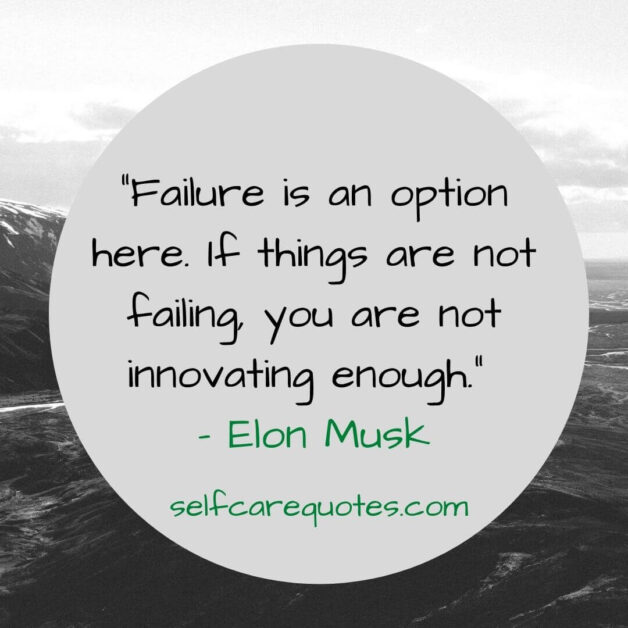 “Failure is an option here. If things are not failing, you are not innovating enough.” – Elon Musk

43. “If something is important enough, even if the odds are against you, you should still do it.” – Elon Musk

44. “You want to be extra rigorous about making the best possible thing you can. Find everything that’s wrong with it and fix it. Seek negative feedback, particularly from friends.” – Elon Musk

45. “You have to be pretty driven to make it happen. Otherwise, you will just make yourself miserable.” – Elon Musk

46.. “There’s a tremendous bias against taking risks. Everyone is trying to optimize their ass-covering.” – Elon Musk

47.. “Some people don’t like change, but you need to embrace change if the alternative is disaster.” – Elon Musk

49. “I think it is possible for ordinary people to choose to be extraordinary.” – Elon Musk

50. “I think that’s the single best piece of advice: constantly think about how you could be doing things better and questioning yourself.” – Elon Musk

51. “If you go back a few hundred years, what we take for granted today would seem like magic – being able to talk to people over long distances, to transmit images, flying, accessing vast amounts of data like an oracle. These are all things that would have been considered magic a few hundred years ago.” – Elon Musk 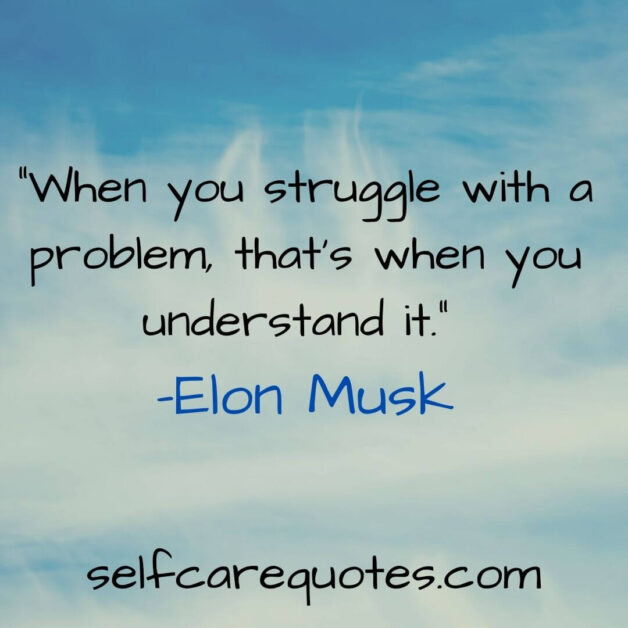 “When you struggle with a problem, that’s when you understand it.” –Elon Musk

Though Elon Musk is an American citizen, he has the legacy of both Canada and South Africa. He was born in Pretoria, South Africa, in 1971. He is the son of Errol Musk and Maye Musk, who is a famous Canadian-South African model. After the divorce of his parents, he decided to stay with his father. He regretted this decision and disliked his father. At the age of seventeen, he moved to America.

Elon Musk spent his early life in Pretoria, South Africa. He joined the University of Pretoria. After moving to Canada, he attended Queen’s University. But he did not complete his study at this University.

If we observe the biography of Elon Musk, we’ll find out that he struggled in his life from his childhood. His parents were separated in childhood. We find that he was severely bullied. He had to suffer a lot. Even he was hospitalized for the torture of some boys. No hindrance could stop him from expressing his intelligence.

He started to earn from his childhood. At the age of twelve, he created a video game, which he sold at $500. He has become successful as he could use his talent. We should also give priority to our personal choice and interests.

Robert Albert RAhttps://selfcarequotes.com
Hi, I'm RA, The Co-Founder of this blog. SelfCareQuotes(SCQ) is the biggest quotation site in the world. I love quotes and enjoy sharing the best ones with you.
RELATED ARTICLES
Authors Quotes

Top 50 William Shakespeare Quotes That Will Inspire You