HomeQuotesTop 50 Self Defense Quotes That Will Protect Ourselves
Quotes

Top 50 Self Defense Quotes That Will Protect Ourselves 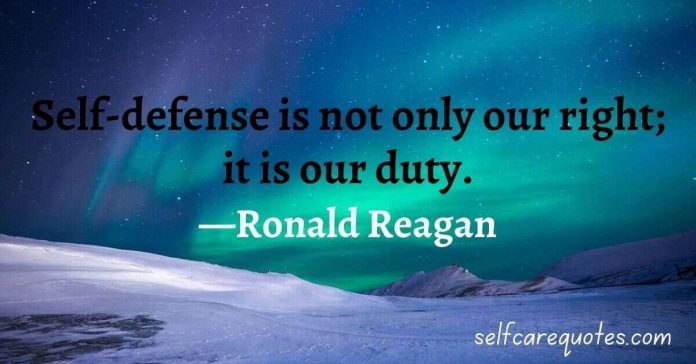 When we try to protect ourselves from other problems and outside situations that is called self-defense. This is very important to live in this world and for our existence.

If we fail to protect ourselves from the adversities of the outside world then the cruelty of this world will kill us. This is a must to continue living in this world. The scholars also accept that we can be violated when our life is in danger.

Some famous quotes also inspire us to be self-protective. These quotes are called self defense quotes. Here in this article, we are going to discuss some most famous self-defense quotes of some famous people. 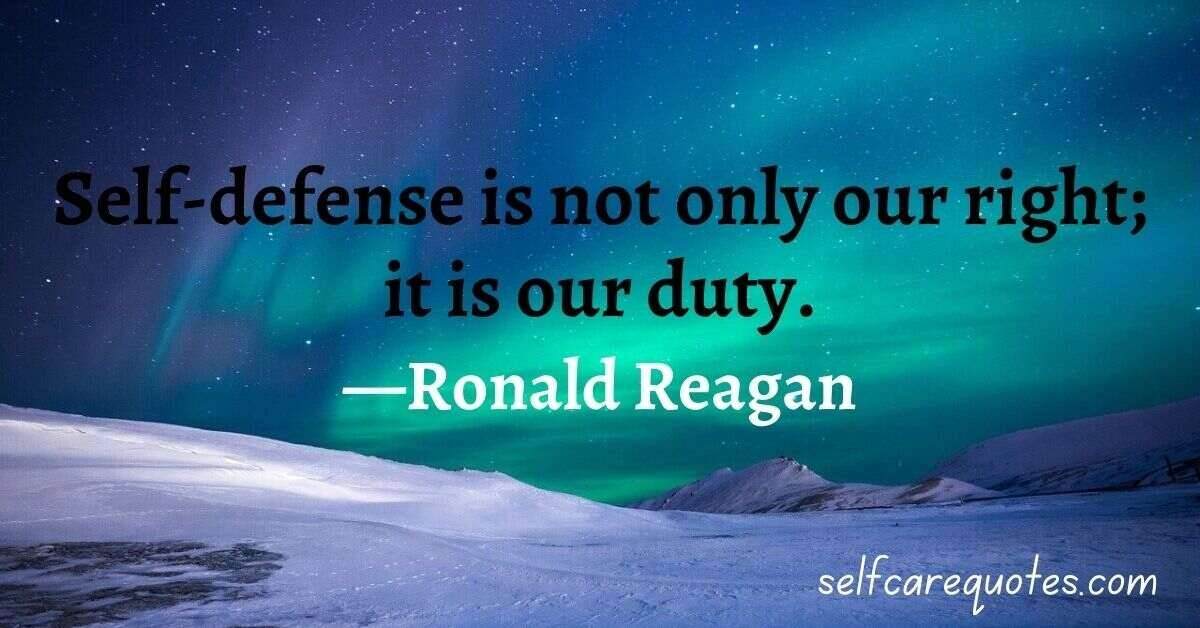 1. Self-defense is not only our right; it is our duty.—Ronald Reagan

2. The essential thing is to bear always in mind that trouble can appear at any time.
Be aware.Be ready.Be alert. —Jeff Cooper

3.Self-defense is not just a set of techniques; it’s a state of mind, and it begins with the belief that you are worth defending. —Rorion Gracie Click To Tweet

4. The criminal does not expect his prey to fight back. May he never choose you, but, if he does, surprise him. —Jeff Cooper

5. Arms in the hands of citizens may be used at individual discretion… in private self-defense.—John Adams

6. There’s only one basic principle of self-defense- you must apply the most effective weapon, as soon as possible, to the most vulnerable target. —Bruce Lee

7. It is true that a victim who fights back may suffer for it, but one who does not almost certainly will suffer for it. —Jeff Cooper

Why is Self-defense Important

There are lots of reasons to be self-defensive. Without it, you will lose your identity and you will also fail to fulfill your dreams. Here I am going to show you some importance of self-defense. All the reasons are taken from the self-defense quotes.

Self-defense will grow self-confidence in us. It will help us to feel that I also can do something. If I fail to protect myself then pessimistic thoughts will center on me and dishearten me. To grow confidence, you need to be self-defensive and also read confidence quotes.

It Increases Self Respect

If you have no self-respect then you will not be able to evaluate your strengths and weaknesses. All these are related to self-defense. These are interrelated. So, it is very important to be self-defensive.

9. Self-defense is so important to know in today's society. It's not just that you might get mugged. It's more for confidence. It's the way you hold yourself when you walk into a room. Every step you take is more… Click To Tweet

10. If you must use your hands, use them with all the strength you possess… If you choose to strike, by all means strike hard. —Jeff Cooper

11. Though defensive violence will always be ‘a sad necessity’ in the eyes of men of principle, it would be still more unfortunate if wrongdoers should dominate just men.—Saint Augustine

12. Self-defense is the clearest of all laws; and for this reason – the lawyers didn’t make it.—Douglas William Jerrold

13. God grants liberty only to those who love it, and are always ready to guard and defend it. —Daniel Webster

15. Let your attacker worry about his life. Don’t hold back. Strike no more after he is incapable of further action, but see that he is stopped. —Jeff Cooper

16. Those who beat their swords into plowshares usually end up plowing for those who kept their swords.—Benjamin Franklin

17. Your mind-set is your primary weapon—Jeff Cooper

19. I don’t even call it violence when it’s in self defense; I call it intelligence. —Malcolm X

20. Your physical safety is up to you, as it really always has been.—Jeff Cooper

23. Though violence is not lawful, when it is offered in self-defense or for the defense of the defenseless, it is an act of bravery far better than cowardly submission. The latter befits neither man nor woman. Under violence, there are many stages and varieties of bravery. Every man must judge this for himself. No other person can or has the right.—Mahatma Gandhi

24. There isn’t any real good reason for fighting except self-defense.—S. E. Hinton

25. Our nation was built and civilized by men and women who used guns in self-defense and in pursuit of peace. One wonders indeed, if the rising crime rate, isn’t due as much as anything to the criminal’s instinctive knowledge that the average victim no longer has means of self-protection.—Ronald Reagan

26. If violent crime is to be curbed, it is only the intended victim who can do it. The felon does not fear the police, and he fears neither judge nor jury. Therefore what he must be taught to fear is his victim.—Jeff Cooper

27. A tree never hits an automobile except in self defense.—Woody Allen

28. justly called the primary law of nature, so it is not, neither can it be in fact, taken away by the laws of society.—William Blackstone

29. Apathy is the self-defense of the powerless.—Letty Cottin Pogrebin

30. Real schools ought to provide people with techniques of self-defense, but that would mean teaching the truth about the world and about the society, and schools couldn’t survive very long if they did that.—Noam Chomsky

31. No sensible person ever opens the door of his house without knowing who is knocking.—Jeff Cooper

32. By doing what our assailant least expects us to do, we may throw him completely off. … what he usually least suspects is instant, violent counterattack, so the principle of aggressiveness is closely tied to threat of surprise.—Jeff Cooper

33. Under any sort of attack, keep cool. And if you must shoot, shoot with precision.—Jeff Cooper

34. The proper course of action, when under attack, is usually to counterattack.—Jeff Cooper

36. It’s better to avoid than to run; better to run than to de-escalate; better to de-escalate than to fight; better to fight than to die. The very essence of self-defense is a thin list of things that might get you out alive when you are already screwed.—Rory Miller

37. As we have seen, the first public expression of disenchantment with nonviolence arose around the question of ‘self-defense.’ In a sense this is a false issue, for the right to defend one’s home and one’s person when attacked has been guaranteed through the ages by common law. —Martin Luther King, Jr.

38. Oppressors can tyrannize only when they achieve a standing army, an enslaved press, and a disarmed populace. —James Madison

40. Use your eyes. Do not enter unfamiliar areas that you cannot observe first. Make it a practice to swing wide around corners, use window glass for rearward visibility, and get something solid behind you when you pause. —Jeff Cooper

41. A people armed and free, forms a barrier against the enterprises of ambition and is a bulwark for the nation against foreign invasion and domestic oppression. —James Madison

42. The necessary consequence of man’s right to life is his right to self-defense. In a civilized society, force may be used only in retaliation and only against those who initiate its use. All the reasons which make the initiation of physical force an evil, make the retaliatory use of physical force a moral imperative. If some “pacifist” society renounced the retaliatory use of force, it would be left helplessly at the mercy of the first thug who decided to be immoral. Such a society would achieve the opposite of its intention: instead of abolishing evil, it would encourage and reward it. —Ayn Rand

43. “What would I do if?..” By thinking tactically, we can more easily arrive at correct tactical solutions, and practice – even theoretical practice – tends to produce confidence in our solutions which, in turn, makes it easier for us, and thus quicker, to reach a decision. —Jeff Cooper

44. Now how do we cultivate an aggressive response? I think the answer is indignation… Your response, if attacked, must not be fear, it must be anger. —Jeff Cooper

”If you find yourself in a fair fight, you didn’t plan your mission properly.” — David Hackworth Click To Tweet

“Those who give up essential liberties for temporary safety deserve neither liberty nor safety.” — Benjamin Franklin

“Protecting yourself is self-defense. Protecting others is warriorship.” — Bodhi Sanders

45. The human instinct for self-preservation is strong. I know, because mine pulls at me, too, like the needle on a compass. And everybody – I’ve been reading some philosophy – everybody seems to agree that the instinct and responsibility of all humans is to take care of themselves first. You have the right to self-defense. You have the right to survive, if you can. —Nancy Werlin

46. Danger, if met head on, can be nearly halved—Winston Churchill

47. If a felon attacks you and lives, he will reasonably conclude that he can do it again. By submitting to him, you not only imperil your own life, but you jeopardize the lives of others. —Jeff Cooper

48. Observe your cat. It is difficult to surprise him. Why? Naturally his superior hearing is part of the answer, but not all of it. He moves well, using his senses fully. He is not preoccupied with irrelevancies. He’s not thinking about his job or his image or his income tax. He is putting first things first, principally his physical security. Do likewise.—Jeff Cooper

49. Lying is an elementary means of self-defense. —Susan Sontag

The thought of self-defense is civil. This is also a part of our civility. Sometimes we have to be ready for war for our personal and country’s self-defense. We should think of it as a very important part of our social and personal life. The self defense quotes teach us a lot. You may read these quotes to get more clarified ideas.