Top 50 Nothing Is Impossible Quotes 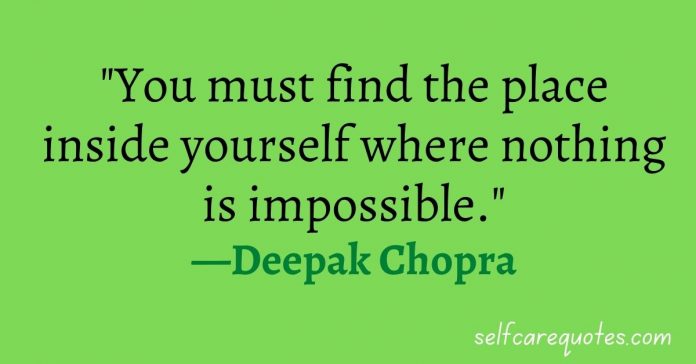 We do a lot of things in our day, week, month, and life. We don’t find success in all of these works. In some works, we fail. But is there anything that is impossible? The tasks we can not do are not impossible, rather they are hard. If we try with passion and hard work then it is possible. Here the possible and impossible has a difference.

Top Popular 55 Nothing Is Impossible Quotes to inspire you and become successful in your career. 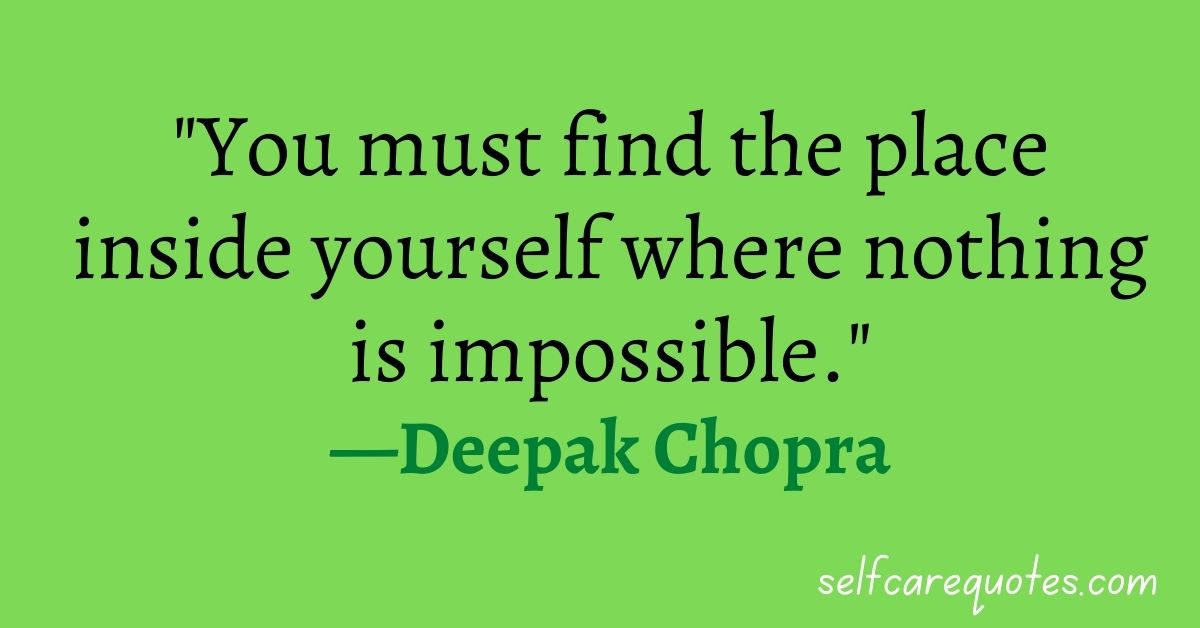 1. You must find the place inside yourself where nothing is impossible. —Deepak Chopra

2. It is difficult to say what is impossible, for the dream of yesterday is the hope of today and the reality of tomorrow. —Robert H. Goddard

4. “Faith is the first factor in a life devoted to service. Without it, nothing is possible. With it, nothing is impossible.” — Mary McLeod Bethune. Click To Tweet

5. “The word impossible is not in my dictionary.” — Napoleon Bonaparte.

6. “Dare to believe those good things are possible when you follow your heart.” — Bryant H. McGill.

7. “I tell you the truth, if you have faith as small as a mustard seed, you can say to this mountain, “move from here to there” and it will move. Nothing will be impossible for you.” — Jesus Christ.

8. “Most of the things worth doing in the world had been declared impossible before they were done.” — Louis D Brandeis.

9. . “The limits of the possible can only be defined by going beyond them into the impossible”. — Arthur C. Clarke.

10. Nothing is impossible until you quit or die trying. —Wes Fesler

11. “Nothing is impossible to a willing heart.” — John Heywood.

12. “Hope sees the invisible, feels the intangible, and achieves the impossible.” — Helen Keller.

13. “When you exhaust all possibilities, remember this: You haven’t.” — Thomas A Edison.

14. “There are many things that seem impossible only so long as one does not attempt them.”— André Gide.

15. “Many of the things that seem impossible now will become realities of tomorrow.” — Walt Disney.

17. “There is only one thing that makes a dream impossible to achieve: the fear of failure.” — Paulo Coelho.

18. “I won’t predict anything historic. But nothing is impossible.” — Michael Phelps.

Nothing is impossible if you believe in yourself

Confidence and self-belief are very important to gain something big. This is the unavoidable thing in the way of success. Suppose you are trying to establish a business but from the beginning you are confused. You are thinking that you might not be able to establish the business then it will be hard to continue working hard on the purpose. On the other hand, you have a strong belief that you will be able to do that work very easily and it is simply possible for you then some more strong things will be easy for you. This is the power of belief in yourself. With self-belief, you will be able to do many hard things easily.

19. “Nothing is impossible, the word itself says ‘I’m possible’!” — Audrey Hepburn.

20. “Women, like men, should try to do the impossible. And when they fail, their failure should be a challenge to others.” — Amelia Earhart.

21. “Man is the only creature that strives to surpass himself and yearns for the impossible.” — Eric Hoffer.

22. “Virtually nothing is impossible in this world if you just put your mind to it and maintain a positive attitude.” — Lou Holtz.

23. “We have more power than will, and it is often by way of excuse to ourselves that we fancy things are impossible.” – Francois Duc De La Rochefoucauld.

24. “Aviation is proof that given, the will, we have the capacity to achieve the impossible.” — Eddie Rickenbacker.

25. “The man of the future may, and even must, do things impossible in the past and acquire new motor variations not given by heredity.” – G Stanley Hall.

29. “What is beautiful if not the impossible? “— Gustave Flaubert.

30. “Darkness comes. In the middle of it, the future looks blank. The temptation to quit is huge. Don’t. You are in good company. You will argue with yourself that there is no way forward. But with God, nothing is impossible. He has more ropes and ladders and tunnels out of pits than you can conceive. Wait. Pray without ceasing. Hope.” — John Piper.

32. “If we are together nothing is impossible. If we are divided all will fail.” — Winston Churchill.

33. “Ordinary people believe only in the possible. Extraordinary people visualize not what is possible or probable, but rather what is impossible. And by visualizing the impossible, they begin to see it as possible” — Cherie Carter-Scott.

35. “Nothing is impossible. Some things are just less likely than others.” — Jonathan Winters.

36. “Doing easily what others find difficult is talent; doing what is impossible for talent is genius.” — Henri Frédéric Amiel.

37. ” Only those who attempt the absurd can achieve the impossible.” — Albert Einstein.

38. “Start by doing what is necessary, then what’s possible, and suddenly you are doing the impossible.”
— Francis of Assisi.

How can you say that nothing is impossible?

This is very simple to say that nothing is impossible but actually, this is hard to prove. Everything is possible means anyone can do any work but doing everything is not easy. We have to work hard for a long time and then we have to wait for the result.

40. “Impossible is a word to be found only in the dictionary of fools.” — Napoleon Bonaparte.

41. “Success is determined by those who prove the impossible, possible.” — James W. Pence.

42. “Only he who attempts the absurd is capable of achieving the impossible.” — Miguel De Unamuno.

43. “All things are possible until they are proved impossible and even the impossible may only be so, as of now.” — Pearl S Buck.

44. “Every noble work is at first impossible.”— Thomas Carlyle.

46. “Believe and act as if it were impossible to fail.” — Charles F. Kettering.

47. “It is impossible to live without failing at something unless you live so cautiously that you might as well not have lived at all, in which case you have failed by default.”— J. K. Rowling.

48. “The difference between the impossible and the possible lies in a man’s determination.” — Tommy Lasorda.

49. “I think that nothing is impossible when you want to fulfill a dream. A lot of people will tell you that you can’t do it, that you don’t have what it takes, but if it is in your heart and you feel it, there is nothing that will stop you. It is like the sun – you can’t block it: it will shine regardless if that is what you want.” — Thalia.

Nothing is impossible everything is possible Quotes

Some quotes inspire us to believe that everything is possible, nothing is impossible. These quotes have some power, we need the motivation to continue any work for long. That motivation works like magic to make our work done. For motivation, we need to listen to motivational speeches, read the motivational text, and do other things. But you might miss the name of the quotes. When you are disheartened and you are not getting any way to continue your working speed then you can take help from nothing but impossible quotes.

50. “With love and patience, nothing is impossible.” — Daisaku Ikeda.

51. “My message, especially to young people is to have the courage to think differently, courage to invent, to travel the unexplored path, courage to discover the impossible and to conquer the problems and succeed. These are great qualities that they must work towards. This is my message to the young people.” — A. P. J. Abdul Kalam.

52. “By asking for the impossible we obtain the possible.” — Italian Proverb.

53. “It is difficult to say what is impossible, for the dream of yesterday is the hope of today and the reality of tomorrow.” — Robert H. Goddard.

54. “Never think there is anything impossible for the soul. It is the greatest heresy to think so. If there is sin, this is the only sin; to say that you are weak, or others are weak.” — Swami Vivekananda.

The ending teaching of the article is that every simple thing is not simple until you do a deserving level of hard work. Another thing that is vital from here is the way we talk that nothing is impossible is not as easy as it sounds. We have to work hard to prove this phrase. The nothing is impossible quotes can help you to make your conception clear that the word impossible has no strength. It is very fragile in front of hard work and passion.