Top 29 Takuan Soho Quotes That Will Give You Inspiration 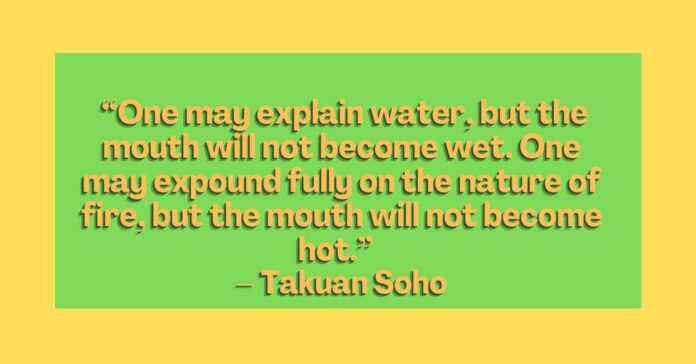 Takuan Soho was a 17th century Japanese monk and military advisor who is known for his wise words of wisdom. Although little is known about his life, Takuan’s thought-provoking quotes have been widely studied throughout history and continue to influence the moral values of people today. Takuan was born in 1573, during the tumultuous Warring States period of Japan.

He was ordained as a Rinzai Zen Monk at an early age and quickly rose through the ranks, becoming a prominent figure in society as a military advisor to shogunate leaders such as Toyotomi Hideyoshi and Tokugawa Ieyasu. He has since become renowned for his philosophical insights into everyday life, focusing on topics such as ethics and morality. His famous quotes have been quoted by many historical figures and are still considered relevant today. 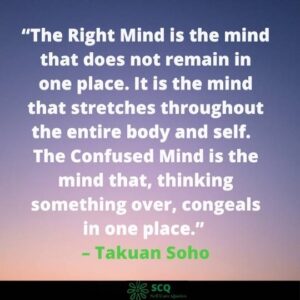 3. “There is no light for those who don’t know darkness.” – Takuan Soho

5. “When you look at a tree, see it for its leaves, its branches, its trunk, and the roots, then and only then will you see the tree.” – Takuan Soho 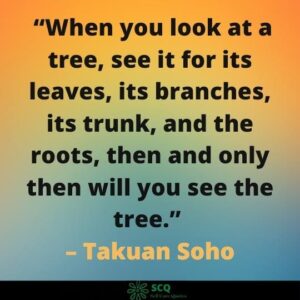 6. “Each action of the warrior is performed from a place of fundamental wisdom. It is completely different from the ordinary behavior of a fool. Even if it looks the same, it is different on the inside.” – Takuan Soho

7. “Completely forget about the mind and you will do all things well.” – Takuan Soho

8. “Make it a secret principle in either seeing or hearing not to detain the mind in one place.” – Takuan Soho

9. “In the case of the swordsman, it means death. When the swordsman stands against his opponent, he is not to think of the opponent, nor of himself, nor of his enemy’s sword movements. He just stands there with his sword which, forgetful of all technique, is ready only to follow the dictates of the subconscious. The man has effaced himself as the wielder of the sword. When he strikes, it is not the man but the sword in the hand of the man’s subconscious that strikes.” – Takuan Soho
“When one practices discipline and moves from the beginner’s territory to immovable wisdom, one makes a return and falls back to the level of the beginner.” – Takuan Soho

11. “Sever the edge between before and after.” – Takuan Soho

12. “It is the very mind itself that leads the mind astray – of the mind, do not be mindless.” – Takuan Soho

13. “When this No-Mind has been well developed, the mind does not stop with one thing nor does it lack any one thing. It appears appropriately when facing a time of need.” – Takuan Soho

15. “The Buddha and all sentient beings are not two.” – Takuan Soho

17. “The mind that becomes fixed and stops in one place does not function freely. Similarly, the wheels of a cart go around because they are not rigidly in place. If they were to stick tight, they would not go around. The mind is also something that does not function if it becomes attached to a single situation.” – Takuan Soho

18. “Although it does not mindfully keep guard, In the small mountain fields the scarecrow does not stand in vain.” – Takuan Soho 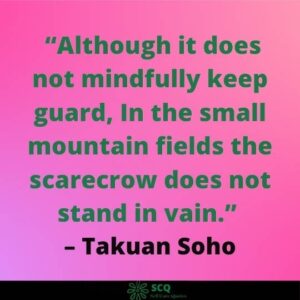 20. “If you would know a man’s good and evil points, you should know the underlings and retainers he loves and employs, and the friends with whom he mixes intimately. If the lord is not correct, none of his friends and retainers will be correct.” – Takuan Soho

21. “If the mind congeals in one place and remains with one thing, it is like frozen water and is unable to be used freely: ice that can wash neither hands nor feet. When the mind is melted and is used like water, extending throughout the body, it can be sent wherever one wants to send it.” – Takuan Soho

22. “When facing a single tree, if you look at a single one of its red leaves, you will not see all the others. When the eye is not set on one leaf, and you face the tree with nothing at all in mind, any number of leaves are visible to the eye without limit. But if a single leaf holds the eye, it will be as if the remaining leaves were not there.” – Takuan Soho 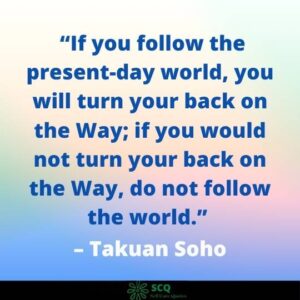 24. “The mind must always be in the state of flowing; for when it stops anywhere that means the flow is interrupted and it is this interruption that is injurious to the well-being of the mind. In the case of swordsmen, it means death.” – Takuan Soho

25. “When a person does not think, ‘Where shall I put it?’ the mind will extend throughout the entire body and move to any place at all. . . . The effort not to stop the mind in just one place – this is discipline. Not stopping the mind is object and essence. Put it nowhere and it will be everywhere. Even in moving the mind outside the body, if it is sent in one direction, it will be lacking in nine others. If the mind is not restricted to just one direction, it will be in all ten.” – Takuan Soho

27. “One is not likely to achieve understanding from the explanation of another.” – Takuan Soho

28. “The unfettered mind: Writings of the Zen master to the sword master.” – Takuan Soho

29. “Presumably, as a Martial artist, I do not fight for gain or loss, am not concerned with strength or weakness, and neither advance a step nor retreat a step. The enemy does not see me. I do not seethe enemy. Penetrating to a place where heaven and earth have not yet divided, where yin and yang have not yet arrived, I quickly and necessarily gain effect.” – Takuan Soho

Takuan Soho was a Japanese Zen Buddhist monk and writer, known for his works on philosophy and martial arts. One of Takuan Soho’s most famous quotes is “No mind”. This phrase has become a source of inspiration for many individuals looking to learn more about the concepts of Zen Buddhism.

The concept behind “No mind” is to clear the mind of the clutter that often clouds it, allowing an individual to focus on their own thoughts without being influenced by external sources. By eliminating these distracting influences, an individual can truly understand their own feelings and emotions in order to make better decisions. Additionally, this quote encourages individuals to live in the present moment instead of worrying about things that have already passed or may never happen in the future.

The famous quote “Not doing” from Takuan Soho can be found in his famous book, The Unfettered Mind. This quote is often used to describe the principle of non-action or Wu Wei, which is a core concept in Zen Buddhism. It suggests that people should not get too wrapped up in their own thoughts and actions, but instead let things happen naturally.

Takuan Soho wrote this quote as an admonition against effortful striving and the idea that one must always strive for something outside of themselves. He believed that if one is able to observe the world with a relaxed mind, they will be able to find profound insight and clarity into their life’s purpose. By embracing this kind of non-doing attitude, people can learn to live more peacefully and become better versions of themselves.

This article will explore one of the most beloved quotes from Takuan Soho, a Japanese Zen master whose teachings have heavily influenced many aspects of Japanese culture. Famous Quote 3: Unhindered Flow is a powerful statement that speaks to the importance of allowing life to flow and embracing change. It encourages us to be mindful of our actions and recognize that we must adapt in order to flourish in any situation.

Takuan Soho’s quote states, “Unhindered flow creates things as they are; hindrances create nothing at all.” This quote emphasizes the importance of accepting change and flowing with it rather than attempting to resist it or fight against it. In doing so, we can create something meaningful out of every situation instead of wasting energy on pointless obstacles or restrictions.

Takuan Soho, a Zen Buddhist monk and samurai strategist of the 17th century, was renowned for his wit and wisdom. In particular, his famous quote “embrace paradox” is one of the foundations of modern Zen thought. This quote encourages us to accept seemingly contradictory truths that exist throughout life. To embrace paradox is to be open-minded and flexible in our thinking, rather than rigid and fixed.

The idea behind Takuan Soho’s famous quote is that there are no absolute truths in this world; rather, we must be willing to look beyond what we think we know and accept multiple perspectives as valuable pieces that make up an ever-evolving puzzle. By embracing paradoxical ideas such as good coming from bad or strong from weak, we can gain deeper understandings about the complex nature of life itself.

Famous Quote 5: Live in the Moment

Takuan Soho was a famous Japanese Zen Buddhist monk and philosopher, renowned for his quotes on life and meditation. His fifth most famous quote is “Live in the Moment”, which has been interpreted countless times by millions of people around the world. The phrase encourages us to appreciate each moment in our lives and live with no regrets or worries about the future or past. In this article, we will explore what Takuan Soho meant when he said “Live in the Moment” and how modern society can benefit from these words of wisdom.

Living in the present moment allows us to experience life fully without being preoccupied with all that has passed or all that lies ahead. Being mindful of each moment gives us an opportunity to be grateful for what we have now rather than worrying about what could have been if things were different in our past or future.

Takuan Soho is a renowned Buddhist thinker and author of the 17th century. Though he passed away centuries ago, his teachings remain relevant in today’s society. His quotes, which often blend wisdom with humor, have been an inspiration to many people since they were first written. In conclusion, Takuan Soho’s legacy can be seen in the way his quotes still speak to modern audiences.

The impact of Takuan Soho’s words has remained strong due to their timelessness and ability to transcend cultures and religions. He is known for challenging conventional thinking and providing insight into complex matters of life and philosophy. His simple yet profound statements about the human condition have long influenced numerous individuals who seek spiritual guidance or personal growth.